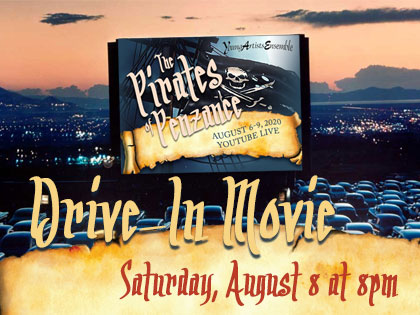 ﻿PLEASE NOTE: Due to less than acceptable internet at the Drive-In Site, we will be showing the recorded show from Friday, 8/7/20. This was an excellent performance by the cast and will provide a Drive-In experience without the stream pausing during the show. The next day we will email a link to the recorded performance on 8/8/20 should you wish to view it at home.
Join the Young Artists Ensemble as we sail the strange waters of live streaming our 40th Annual Teen Summer Musical: The Pirates of Penzance!
Drive-In Performance of the Live Stream
Tickets are only available for purchase online
Drive-In Movie will be held in the parking lot of Conejo Creek South at 1300 E Janss Rd in Thousand Oaks (map)
Click HERE for a parking lot chart.
Drive-In FAQ:
Your ticket is for a designated parking space that is at least 6 ft. from all other vehicles
Over-sided vehicles such are RV's are not permitted.
All patrons must remain inside their vehicles during the event.
We will provide the radio station setting for your FM Radio at the event.
Restrooms are available.
Patrons exiting their vehicle to use the restroom must wear a mask at all times when outside their vehicle.
No more than 2 people per vehicle at a time can leave to use the restrooms.
Patrons must maintain 6 ft. of social distancing when traveling to and waiting for the restrooms
Restrooms will be cleaned and sanitized during the event.
There will be no concession sales but you can bring your own snacks.
Do not leave your car running. We can help if you need a jump start.
SHOW INFORMATION:
Music by Arthur Sullivan; Libretto by W.S. Gilbert
Directed by Mark Andrew Reyes; Musical Direction by Zachary Spencer; Conducted by Susan Treworgy-Calkins.
This is live performance featuring all 20 members of our cast. Our orchestra has been recorded and with the overture filmed. All of this is done safely outside on our two patio safety stages which is 60 ft. long providing each performer a 6 ft. by 4 ft.
Cast List:
Daughter, Ariela Behar
Daughter, Cecilia Catalini
Pirate, Theo Chambers
Pirate, Samantha Green
Daughter, Emmy Julian
Daughter, Gracyn Manley
Pirate, Aubrey McGowan
Daughter, Allie Mohelnitzky
Pirate, Drake Munson
Pirate, Hunter Uliasz
Major General, Genysia Brown
Police Sergeant/Pirate, Damian Castillejo
Pirate King, Lucas Chambers
Isabel, Aran Denis
Mabel, Charlotte Green
Kate, McKenna Keiser
Samuel, Molly Kreitman
Edith, Maddie Ragsdale
Frederic, Daniel Roth
Ruth, Lacey Tuell
Mistakenly apprenticed to a pirate (instead of a pilot) by his nursemaid Ruth at the age of eight, the handsome Frederic is now twenty-one and, though quite fond of the group of joyous and fun-loving pirates, chooses to abandon his profession, dedicating himself instead to their eradication. Shortly after leaving them, he encounters a gaggle of beautiful maidens (one of whom, Mabel, steals his heart) and their father, the eccentric Major-General. The whole group has a run-in with the pirates themselves before escaping on the false premise that the Major-General is an orphan -- a fact these tenderhearted pirates simply cannot help but take into account, given the fact that the majority of them are orphans themselves. Just as Frederic is ready to lead a band of lily-livered policemen to take out the Pirate King and his men, a secret is uncovered that will change his fate forever.